A Twitter user has narrated an unfortunate incident that happened in his compound. According to him, he was forced to break a fight that ensued between his Landlord and his Landlord’s brother. Apparently, the Landlord’s 15-year-old daughter was about to commit a second abortion for her uncle(Landlord’s brother) who had been sleeping with her since he got deported from America in 2018.

The Landlord found out about the betrayal of his biological brother, he wanted to beat life out of him. That was how the fight began.

The Twitter user,@GospelJosiah made this known in a thread of tweets.

My landlord’s 15year old daughter is pregnant for her 35yr old cousin. This is no make up story fam! I woke up to some horrible noise about an hour ago. Though my house is by the road but this noise is unusual so I stepped out to be sure if I needed to pack & japaa.

But I met my neighbor’s trying to break a fight between my landlord, his younger brother and his wife. My landlord somewhat respects me for some reason I can’t tell so I managed to get across to him and calm him down. He grew up abroad so his British English is nice to hear.

His wife entered the house too dragging their 2nd daughter by the ear to into the room. I didn’t want to ask what happened so I tried the reverse psychology approach of telling him not to tell what really happened but he should just calm down and handle things like a man.

He shouldn’t wash his dirty linens outside as a big boss that he is. This was when the gates of his mouth flung open and the gist began to roll. His 15yr old daughter is one of the prettiest girls around who actually looks 20- kids of nowadays. I like her too till I knew her age.

He said when that his younger brother got deported from the US, he was the one that set up here in Nigeria, kept it a secret so that he can try to establish himself before allowing anyone know he was back from the US & that would eliminate the deportation gist.

Sometime last year, he started allowing his children go visit him during holidays and weekends just to give him a sense of family and encourage him to get married and have children too who would keep him company. If only he had known.

Fast forward to last night, this brother of his had come to spend a few days with his family because they had some business to discuss. His wife found their daughter sneaking into his room at very odd hours so she tried to observe. She wanted to go open the door & send her to bed

But what she heart blew her away. Her daughter was telling her uncle that she’s pregnant again and is not willing not abort the baby that the last time was too painful and she bled for days

the idiot was still trying to convince and fvck her on top this shit.

That was when she got angry and left only to open the door and meet her mum standing there in tears. The wife dragged her to her room where she confessed that he started sleeping with her last year and he has been giving her money with lots of threats.

Soon as he got home that morning at about 6am from where he went to check on the goods he imported, his wife downloaded the gist to him and that’s where the whole brouhaha started from. 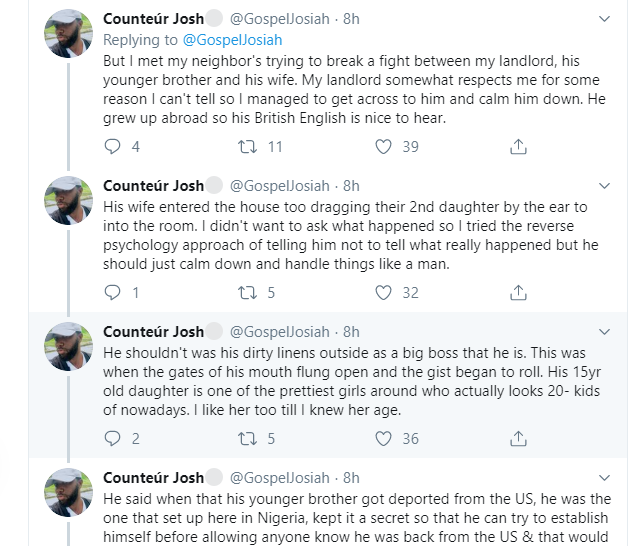 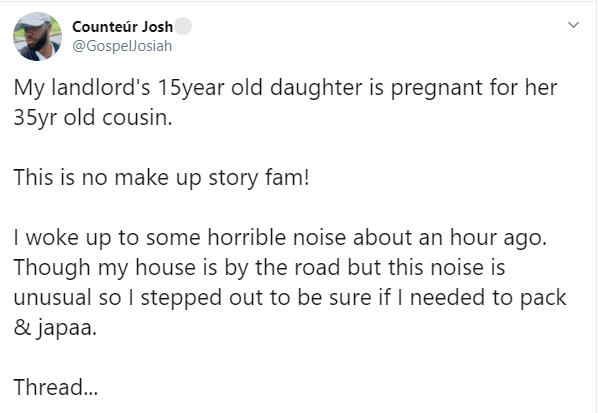