At the meeting between the Independent National Electoral Commission ( INEC ) and the Committee of Vice Chancellors of Nigerian Universities ( CVCNU ),  Mahmood Yakubu stated that lecturers who practice partisan politics won’t have slots to work are ad hoc staff during the upcoming elections.

He made the declaration on Thursday in Abuja as he explained to the vice-chancellors that they were not delegated any duty to those set of lecturers under any circumstance.

Although, The INEC chairman also noted that Academic staff, as well as the Vice-chancellors, are crucial to the success of the elections, stressed that those with political leanings may comprise the integrity of the exercise.

He further commended the efforts that have been made by the University leaders to ensure transparency during general elections and asked that such gestures should continue. 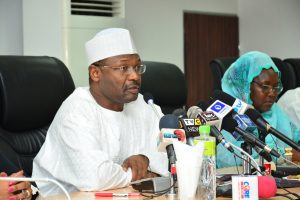 He stated, “For the 2019 general elections, the commission would require 10,603 staff to support various collation and declaration processes. We need the support of our universities to source the requisite members of academic staff on the understanding that this is essentially a national service.

“We have requested from each university, a specified number of academic staff as contained in my letter to the vice chancellors. Staff members who are card-carrying members (of political parties) or have participated in partisan politics should not be nominated.”

While responding to Mahmood’s pleads, the Vice Chancellor of the Modibbo Adama University of Technology, Yola, Professor Kvari Muhammed, explained that his compatriots have been, and will continue to be dedicated to ensuring free and fair elections in the country.

Also present at the meeting was professor Abubakar Rasheed, the Executive secretary of the National University Commission. When delivering his speech, he corroborated what the INEC chairman had said by urging Vice Chancellors to appoint lecturers who are genuinely non-partisan.

Finishing Behind City Last Season One of My Biggest Achievements- Mourinho