An Almajiri boy has been found sleeping on a pile of dirt in Kano. The sad photo of the boy has gone viral on the internet which portrays the fate and horror of children condemned to Almajiri.

According to the population statistics created by the Kano Statistics Board, about 3.67 Million under-aged children have been classified as Parentless Wanderers in Kano State.

These children are usually abandoned by their parents and left to beg on the streets in other to fend for themselves.

This is a part of what the Islamic religion calls Almajiri. A culture that allows parents to abandon their young children in the name of exposing them to the search of Islamic knowledge. 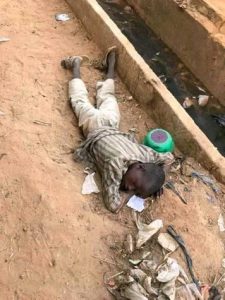 Full details of Kano State population statistics by the state’s Statistic Board includes;