Dorothy stated that some of the ladies told her that the officers went as far as using water sachets as condoms to assault them sexually.

The news about the arrest of 70 ladies for allegedly engaging in prostitution broke out last weekend when a lawyer, Mart Obono, tweeted about it.

According to Mart, the raid was carried out by police officers attached to the Utako Police Station in the Capital Territory. 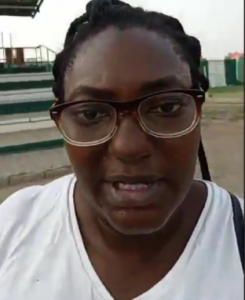 The ladies were then detained throughout the weekend at the station without having any opportunity to reach out to their family members.

When they were eventually arraigned to a mobile court in Area 10, old Parade ground in the city, Dorothy alongside her team, attended the proceedings and discovered that the officers had asked them to either have sex with them or pay a sum of N5,000.

According to her, the ladies stated that they had also been forced to plead guilty.

See the videos she recorded after attending the mobile court below.