A couple that killed and dismembered a 24-year-old lady, Sydney Loofe, has been sentenced to death by a court in Nebraska, United States.

Loofe of Lincoln, Nebraska, worked as a cashier at a hardware store as at the time of her death on November 15, 2017.

She had gone on a date with a woman called Audrey, who she met on dating app Tinder.

The pair had gone on a first date two days earlier, and had simply driven around getting to know each other.

Read Also: 8 children die after locking themselves inside abandoned car in Lagos

However, co-workers became worried on November 16 when Loofe did not show up at work.

Her parents, George and Susie, who became worried after failing to reach her on phone, drove to her apartment.

They reportedly found her car parked in her garage and her cat hungry, sensing that something was amiss as their daughter would never leave her cat, Mimzy, unfed. 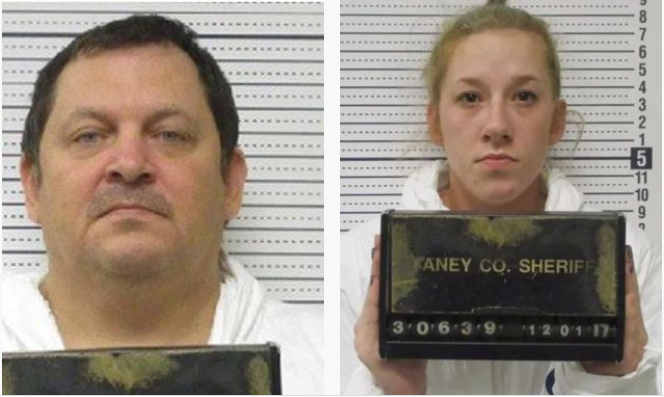 The worried parents then filed a missing person report with the police afterwards.

Police were able to trace her phone’s last location to Wilber, a city 35 miles from Lincoln.

The police began to focus their attention on Loofe’s daughter, Audrey, whom they were able to track down through Tinder.

In the course of the investigation, police found that “Audrey” was in fact a woman named Bailey Boswell, then 23.

She lived with her older boyfriend Aubrey Trail, then 51, in Wilber.

After police declared the couple “Persons of Interest”, Bailey, Loofe and Trail’s phone were traced to a location 60 miles west of Wilber.

After police swooped on the location, Loofe’s body was found buried there, having been cut into 14 pieces and some of her body parts were never found.

Bailey and Trail were arrested and charged to court.

According to prosecutors, the couple had planned to kill someone before Bailey found Audrey through Twitter.

The prosecutors said that the pair chose their victims together looking through social media pages before Audrey went ahead to contact the would-be victim.

Prosecutors told the court that the couple bought the tools used to dismember Loofe hours before she was killed, and that she was targeted because she lived 150 miles away and they hoped her disappearance would not be traced to them.

Against his defence team’s arguments, Trail told the court that “it was only me, Bailey and Sydney there the night Sydney died. There were no two other girls there. There was no $15,000 paid for a sexual fantasy.”

Meanwhile, three women testified about being lured into Trail and Boswell’s sex cult via Tinder between June 2017 and the November Sydney died.

In June this year, at a sentencing for Trail in front of a three-judge panel, he gave a statement. He admitted he’d killed Sydney but insisted it wasn’t premeditated.

He had killed her because he was worried that Sydney would go to the police if he let her go.

“I won’t say I’m sorry, as that would be an insult to you after what I put you through,” Trail said to Sydney’s family. “And I won’t ask for forgiveness as I don’t believe there is such a thing. I have done some terrible things in my life, but this is the only thing I have ever done that I feel real regret about.”

The judges said Trail had displayed a “cold, calculated” level of planning, pointing out that he had even bragged about the killing afterwards and joked that he had drunk Sydney’s blood.

They said that dismembering her body was needless and done to satisfy his “intellectual and sexual curiosity”. Trail was given the death penalty.

At Boswell’s sentencing last month, she also faced the death penalty. She begged for her life to be spared for her “daughter’s sake”.

The judges said Sydney had found herself in the killers’ flat, outnumbered and unable to defend herself.

“Boswell’s actions and words demonstrate that she had no regard for the life of Sydney Loofe beyond her own pleasure,” one judge said.

But one judge didn’t agree on the death penalty, so Boswell was sentenced to life in prison without parole.

Her legal team said they would appeal.

You’re a failed politician, stop blaming Buhari for your woes –…