A man was seen in France, properly  dressed with shades on and a backpack walking into an Applestore and in a moment  of rage began to destroy gadgets.

He smashed every available  iPhone, iPad, and laptop he could see, with a metal petanque ball. 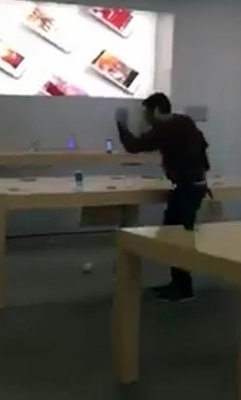 While smashing the gadgets, he was filmed to have been ranting in French before been accosted  by a security man who ran up to him.

When questioned  on his behavior,  he surprisingly walks out of the shop. There was no arrest made by the company  and the man hasn’t been arrested.

The video of the incident posted to Twitter on Thursday afternoon has so far received more than 4000 views.

Check out the Magnificent Mansion of these two Supermodels