As widely rumored, Apple announced it will be holding another virtual event next week on Tuesday, October 13th with the invitation teasing the announcement with the phrase “Hi, Speed.”

SEE ALSO: Top 5 Smartphones to look forward to in 2020

The later launch is likely due to delays created by the COVID-19 pandemic. This is going to be its second event after unveiling new Apple Watches and iPads in a mid-September event. The new device, rumored to be called the iPhone 12, is expected to include super-fast 5G wireless connectivity and new squared-off edges (similar to the iPad Pro). 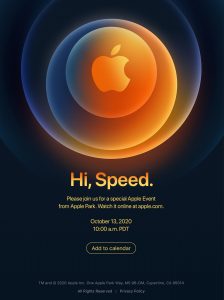 Apple is rumored to also announce new over-ear headphones (Apple removed competing headphones from its store ahead of the event), a smaller and more affordable HomePod, and its location-tracking tags that are apparently called AirTags during the event.

The prices of the new iPhone 12 series are expected to largely remain the same, but Apple is expected to upgrade the devices’ features, including better cameras, faster chips, and the newest software, iOS 14.