Atletico fought back on Wednesday from 2-0 down to force a draw on matchday one away to Juventus.

It was looking like one-way traffic for the host until a header by Stefan Savic inside the six-yard box flew into the back of the net gave the visitors a way back into the match. 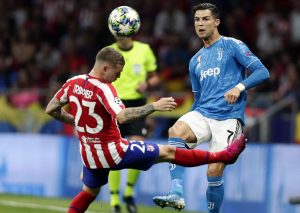 It wasn’t going to be an easy point to come by for the Spaniards given the quality of the opposition but on the 90th-minute mark, Hector Herera silenced the home fans sparking jubilation among the travelling fans.

Aaron Ramsey joined Juventus from Arsenal for free in the last summer transfer window ending an almost decade long relationship with the London side with whom he boasts of three F. A Cup titles and a Community Shield.

In Group D’s other game, Lokomotiv Moscow won 2-1 in Germany against Bayer Leverkusen.

Juventus host Leverkusen on 1 October while Atletico travel to Russia to face Lokomotiv on the same day.

Disney+ releases trailer for ‘Rise’, Giannis and the Antetokounmpo family…