Pop singer, Olubankole Wellington, popularly known as Banky W, has hit back at some women who insulted him for allegedly owning a 1999 sports utility vehicle.

The incident, which happened three days ago, showed the musician being filmed by two women at a grocery store who apparently felt the vehicle he was driving was not suitable for someone in his class, whereas raining insults at him as he was offloading goods into his vehicle.

In response to the “cringe worthy, creepy video” as described by the artiste, he revealed that the vehicle was in fact not a 1999 model but a 2008 own and it was currently on sale to the highest bidder.

“The 2008 Range is up for auction. We’re using the car sale to raise money for a worthy cause, so we’ll start the bidding at one million naira only,” Banky said.

He noted that he still drove a 2008 model SUV due to the need to own a nice home before a newer car.

“You see, I’ve never found it necessary to own more than one car. Mostly because I can only ever drive one car at a time; and when I bought the car in 2011, I promised myself that I would never buy another car until I owned the home I live in.

Banky said as the car went from being “kind-of-trendy” to being just old, he decided to get a smaller vehicle and remained adamant at getting a nicer model until he got a house of his own.

However, Don Jazzy was not having it! He took to Instagram to criticise the women. The popular Nigerian music producer and boss of Mavin records Don Jazzy recently showed another side of him on social media. Known for his playful antics, Don Baba J ‘changed it’ for two ladies who mocked the car Banky W and his wife Adesua drive.

He wrote that: “Disgusting shallow minded good for nothing people that will never succeed in life. No be curse but f that’s how they think then I’m really sorry for them.” See his post below: 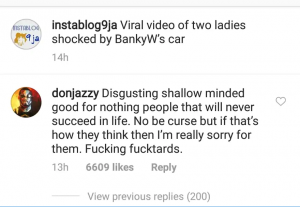 She said yes! Sergio Ramos gets engaged to his baby-mama