Barca president weighs in on Valverde’s future at the club

There are already strong indications that Barcelona’s coach will retain his job as the manager of the Catalan club, come next season, especially since the president of the club, Josep Maria Bartomeu gave his support for him on Thursday.

Ernesto Valverde has come under heavy criticism in the past few weeks after his team blew away a three-goal first leg advantage over Liverpool FC in the Champions League Semi Final.

However, the club’s most important decision maker has stated that even if the manager loses the Copa Del Rey final, he would still be the coach of the team.

Barcelona would be looking to win a brace against Valencia on the 25th of May, following their Spanish La Liga victory this season. 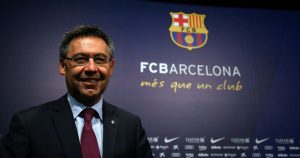 While expressing his satisfaction over the coach’s performance, Bartomeu said, “Ernesto already said the other day that he has the support of the president and the board because he is the coach we want.

“He has a contract and we are very happy with him.”

Speaking on the club’s plans for the incoming season, the Spaniard stated, “The planning for next season has been underway for some time.

“Now it is about the players recovering from the mental shock that we suffered. But the result of the Copa final will not be decisive for anyone.”