A coalition of Biafra groups has revealed fresh plans towards a possible secession from the entity called Nigeria.

The leader of MASSOB, Uchenna Madu stated this while addressing newsmen in Owerri.

According to the MASSOB leader, the reason for this decision was to create a strong synergy with Igbo leaders for the imminent actualization of the Sovereign State of Biafra.

One of the high point topical issues discussed during the meeting was the security of Igboland during the forthcoming 2019 general elections in Nigeria and other strategic concerns that is connected to ndi igbo.

Madu said “The leadership of Alaigbo Development Foundation, led by Professor Uzodinma Nwala had a closed door meeting last Sunday with the representatives of the Coalition of pro-Biafra groups in Owerri’’. 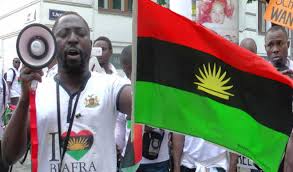 “The consultative meeting flashed on the need to draw the attention and reassurance of other anti self determination elements in Igbo society into driving their political ships towards the yearnings and desires of Ndigbo.” He said.

Though, details of the meeting were not fully unveiled, it harped on the need for pro Biafra and self determination leadership heads and figures to swallow their individual prides and egos and establish a spirited and brotherly working relationship among themselves for the overall interest of our people.

The MASSOB leader however firmly stated that “The details of other issues discussed which includes the conscious security of Igbo land, 2019 general election and other diplomatic contacts will not be disclose now.”

Want to know How to Spot a Liar? Australian Lying Experts Reveal the Tell-Tale Signs Someone is Fibbing to You