Blame Buhari, APC for Any Upsurge in Coronavirus Infections – PDP

The Opposition Peoples Democratic Party (PDP) have called on Nigerians to be extra vigilant and blame President Buhari and the ruling All Progressives Congress (APC) for any upsurge of Coronavirus cases in the country.

The PDP said this in a statement while reacting to the news of the arrival of Chinese doctors to help in the fight against the Coronavirus in the country.

See Also:Coronavirus: Chinese Experts arrive in Nigeria, to remain in Quarantine for 14 Days

Although the Government has said the Chinese doctors are coming on a private arrangement, most Nigerians, including the Nigerian Medical Association (NMA) condemned the move by the government.

The PDP stated that it was alarmed that despite the vehement opposition to the idea, the Chinese doctors were still allowed in the country.

The party expressed concerns that the doctors will expose more Nigerians to th the Coronavirus having come from the epicentre of the viral Infection.

The PDP also questioned the motive of the doctors as well as their true mission on Nigerian soil.

Read the full statement released by the PDP below:

The People’s Democratic Party (PDP) charges Nigerians to hold President Muhammadu Buhari responsible should there be any upsurge in the rate of COVID-19 infection and death in our country following the importation of doctors from China, the epicenter of the scourge, by the Muhammadu Buhari-led Federal Government.

The PDP is alarmed that President Muhammadu Buhari ignored the protests by Nigerians and professional bodies including the Nigerian Medical Association (NMA) and allowed the importation of the Chinese doctors despite warnings that bringing in doctors from the hotbed of the plague will expose our citizens to further risks.

This is even as Nigerians across board have continued to question the status, identity and interest of the Chinese doctors as well as the safety of kits and equipment from China, particularly following scary reports of escalation of the scourge in certain countries reportedly after the arrival of Chinese medical personnel in those countries.

Moreover, our doctors and nurses have been on top of the situation with records of recoveries and less casualties, thus raising questions about the real intentions of bringing in doctors from China.

The situation is even more distressing as the Presidential Task Force (PTF) on COVID-19 had been making frantic effort to exonerate itself from the decision to bring in the Chinese doctors into our country.

The PDP wants President Buhari to note that Nigerians already know the pace, intensity and trajectory of COVID-19 statistics at the time the Federal Government, which he leads, gave passage to these Chinese doctors.

Nigerians are aware that since the index case was reported till date, our nation’s COVID-19 data stands at 254 confirmed cases, out of which 44 have been successfully treated by our doctors with 6 deaths, which reportedly had other underlining ailments.

Our party therefore calls on the entire world to hold President Muhammadu Buhari responsible should there be any sudden upsurge in COVID-19 infection and deaths in our country, now that the Chinese doctors have been brought in despite protests by Nigerians.

The PDP however charges Nigerians to be extra vigilant at this time as our party also demands that the Presidential Task Force outlines the states and local governments where the Chinese doctors are expected to operate, to enable Nigerians monitor their activities as well as the aftermath of such activities. 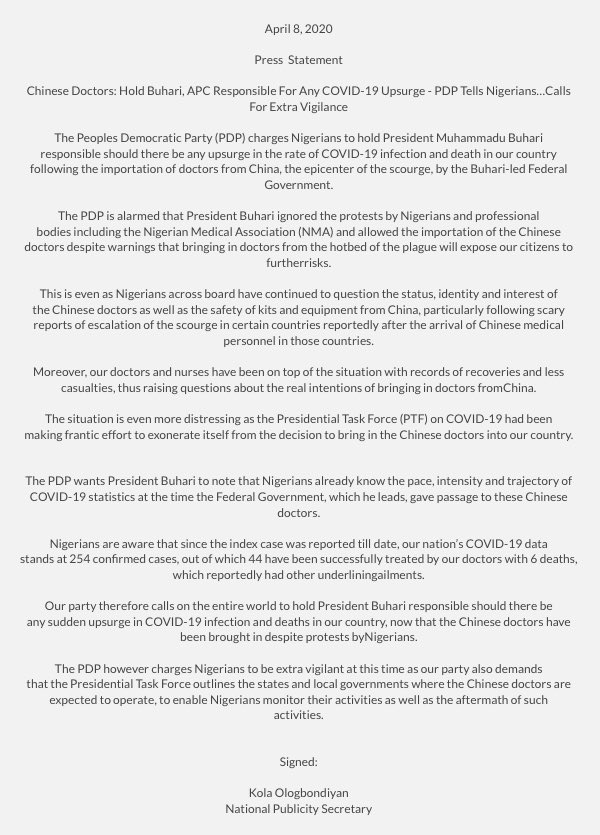 Schools in Edo to Remain Closed till Feb. 1 – Obaseki