Multiple bomb blasts went off at a busy motor park in Kano, killing as many as 30 persons.

About six explosions were heard at the New Road Motor Park in Sabon Gari area of Kano metropolis, a inter-state luxury bus park, frequented by people travelling to the Southern parts of Nigeria. Most of the dead were park workers, traders and passengers aboard a Lagos-bound luxury bus.

The cause of the explosion could not be ascertained as at press time. While some attributed it to an Improvised Explosive Device (IED) planted in a luxury bus, others say it was the work of three suicide bombers who positioned their Golf car, which had been primed with explosives, between Gobison Luxury Bus and one other before detonating the explosives.

The National Emergency Management Agency (NEMA) said last night that the death toll could not be ascertained. NEMA spokesman Yushau Shuaib, in text messages said: “Rescuers and security personnel are yet to determine the source of explosions that occurred this evening at a motor park for long journeys in New Road, Sabo Gari. While casualty figure is not available at the moment, the seriously injured have been taken to the hospital and bodies evacuated.”

The scene was immediately cordoned off by men of the military Joint Task Force (JTF) to pave the way for the evacuation of the victims, who were taken to the Murtala Muhammed Specialist Hospital.

About 10 buses, including the Gobison Luxury Bus, were wrecked.

A survivour, who identified himself as Mr. John, told this reporter: “I went to the motorpark with my family who were billed to travel to Lagos. I had purchased the ticket and wanted my family and I to have some refreshment a few metres away from where the Lagos-bound luxury bus was parked.

“As we started taking the refreshments, we heard a loud explosion, the smoke of which enveloped the area. We survived by the grace of God. My immediate family and I are not hurt, but let me tell you, my brother, many people died.”

In his reaction, President Goodluck Jonathan condemned the blasts, saying it would not stop his administration from fighting terrorists.

A statement released by his Special Adviser on Media and Publicity, Dr. Reuben Abati quoted President Jonathan as saying that the incident would  not deter the Federal Government from its determination to overcome those who did not mean well for the nation.

He added that the government would not be stampeded into abandoning what he described as its unrelenting war against terrorists.

The statement read, “President Jonathan reassures Nigerians and foreigners in the country that the Nigerian Government will continue to do all that is required to ensure the safety of lives and property, including continued collaboration with local and international partners and stakeholders to check the menace of terrorism.

“President Jonathan commiserated with the victims of the Kano explosions, their families and friends, and assured the Kano State government of the Federal Government’s continued support.”

Meanwhile, suspected Boko Haram Islamist militants in Maiduguri, the Borno State capital,  laid siege to some schools, killing four teachers and injuring many others, including pupils.

Virtually all the schools in the city were hastily shut as news of the killing of four teachers  and wounding of pupils  in the city spread. 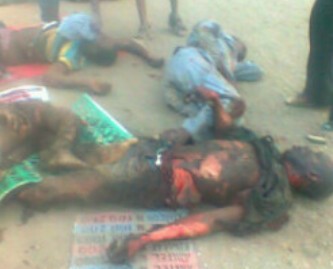 Bill Gates Did Not Cancel Visit Over Alams – Presidency