Bovi saves a fan who was about to commit suicide

Bovi, one of the Nigerian’s famous comedian has taken to his social media page to review on how a fan was saved from committing suicide after watching his video.

The superhero revealed a DM which he received from the fan who was at the brink of committing suicide but after she stumbling on the comedians YouTube videos and she changed her mind.

READ ALSO: BBNaija2019: Looks like Tasha may be the next PepperDem winner

Bovi stated that such are the messages that he receives from his fans frequently. He further stated that one of the requests he made to God was not just to make his fans laugh at his jokes, but also to leave them happy.

I get mails like this all the time. I remember vividly my prayer to God when I started stand-up comedy professionally; “dear God, I don’t just want to make people laugh. I want to make them happy”. Mental health issues are real. Let’s not think people are bluffing all the time. Even people who threaten to take their lives but don’t also need help. Lastly, happiness is a choice. Let’s always remember that.

Insisting that happiness is a choice, the comedian also stated people shouldn’t ignore suicidal individuals or take their intents for granted. 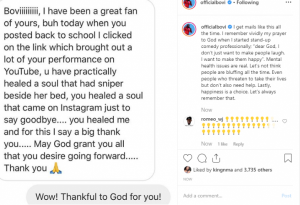 BBNaija2019: Looks like Tacha may be the next PepperDem winner