Car Dealer Calls Out Dino Melaye, Claims He Hasn’t Paid Up Balance for Mercedes Benz Since 2019

Controversial Nigerian politician, Senator Dino Melaye, has been called out on social media for owing his company for a car he bought.

In an Instagram post, the car dealer on Instagram, Unique Motors, called out the former senator and request he pays up his balance on the vehicle he bought since 2019.

In a new post shared on Unique Motor’s Instagram story, they shared a photo of Dino posing by a Mercedes Benz SUV which already had the politician’s customised number plate and claimed he was yet to pay up his balance on the vehicle since 2019.

According to Unique Motors, they just wanted to be paid their balance for the car which was owed them since 2019.

The former senator is known for his great love for fancy cars and his expansive garage. However, nobody would have imagined that he would get called out for being a debtor. 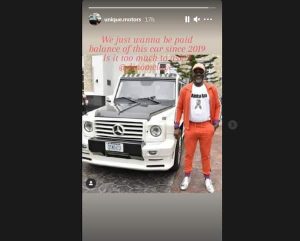