CCT has just ordered the apprehension of the suspended CJN, Walter Onngoghen. The directive enlisted major security agencies for the task, asking them to ensure that he is available for his trial on Friday, 15th of this month.

The panel, which was led by Mr. Danladi Umar, stated that the IGP of Police, as well as the DG of DSS, should carry out the arrest warrant for Onnoghen,  and bring him before the panel by all means necessary.

The order came in after the Federal Government applied for a bench warrant against the Ex CJN. He had initially failed to appear before the panel to respond to the allegations of nondisclosure of assets when he became the CJN in 2017.

When the hearing of his case resumed on Wednesday, February 13, The counsel representing the Federal government made reference to the section 6, subsection 1 of the CCT Practice Direction, as well as the section 396 of the Administration of Criminal Justice Act, ACJA, 2015. Thereafter, he applied for a bench warrant against Walter Onnoghen. 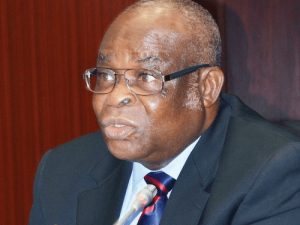 He said,  “May I draw your attention and the honorable members to the fact that the defendant is not in court today. I hereby humbly apply for a warrant of arrest against the defendant.”

Although the lawyer representing the defendant quickly urged that the tribunal should not grant the application, the Judge presiding over the case eventually issued the bench warrant as requested.

“My ambition is not worth the blood of any Nigerian” – Atiku