China’s government on Thursday banned effeminate men on TV and told broadcasters to promote “revolutionary culture,” broadening a campaign to tighten control over business and society and enforce official morality.

That reflects official concern that Chinese pop stars, influenced by the sleek, girlish look of some South Korean and Japanese singers and actors, are failing to encourage China’s young men to be masculine enough. – AP

The response came after a delegate of the Chinese People’s Political Consultative Conference, a top political advisory body, had suggested that Chinese schoolboys are “weak, self-effacing, and timid,” and maybe unduly influenced by so-called little fresh meats — handsome, well-groomed, delicate-featured celebrities in the vein of K-pop stars. The proposal also described the feminization of Chinese boys as “a threat to the development and survival of our nation.” -Sixth Tone

“Finally, the education ministry does something right,” wrote one user on Weibo who claimed to be a teacher. “Boys now are in dire need of more exercise so they can be manlier. They’re too gentle these days.”

China is also promoting masculinity within their military ranks, as opposed to the USA’s more ‘inclusive’ approach.

On Saturday, China ‘unpersoned’ billionaire actress Zhao Wei – removing her content from streaming platforms without explanation. Her name was removed from all television series, films, short videos and promotional materials from platforms including Tencent Video, iQiyi and Youku.

Per SCMP, Zhao shot to fame for her role in My Fair Princess, one of the most successful Chinese television shows of all time. It ran from 1998 to 1999.

The West, meanwhile, is ‘terrified’ at images of Chinese schoolchildren undergoing mortar training, while preadolescent boys twerking for adult men is simply… progressive. 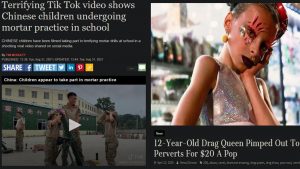