It was a captain fantastic display from Mark Nobel as he led by example in West Ham’s demolition of Bournemouth on New Year’s day. A brace including a penalty in the first half contributed to a 3-0 lead at half-time.

The victory lifted West Ham out of relegation places but defeat for Bournemouth meant they have dropped into relegation positions.

David Moyes returned to the club on Sunday after a season and half away and took charge of the team. He says attributed the victory to the hardwork and hunger of the team got them the much deserved victory.

“I don’t think I could have had a better start,” he said. “But I can’t take the credit, the players take the credit with their attitude and commitment, it felt as if they could give the supporters something. They played really well.

“We’ve only had a couple of days with them and I tried to make it as simple as I could. In truth, I don’t know most of the players but I tried to use every bit of time, I had a conversation with them all and spoke to one or two individuals.

“It’s the first game and [it] felt I didn’t have enough time to work with the players – that’s why it’s difficult to take any credit.

Moyes’ second spell couldn’t have gotten off to a better start, he has now set a while new level of expectations which must be maintained going forward. 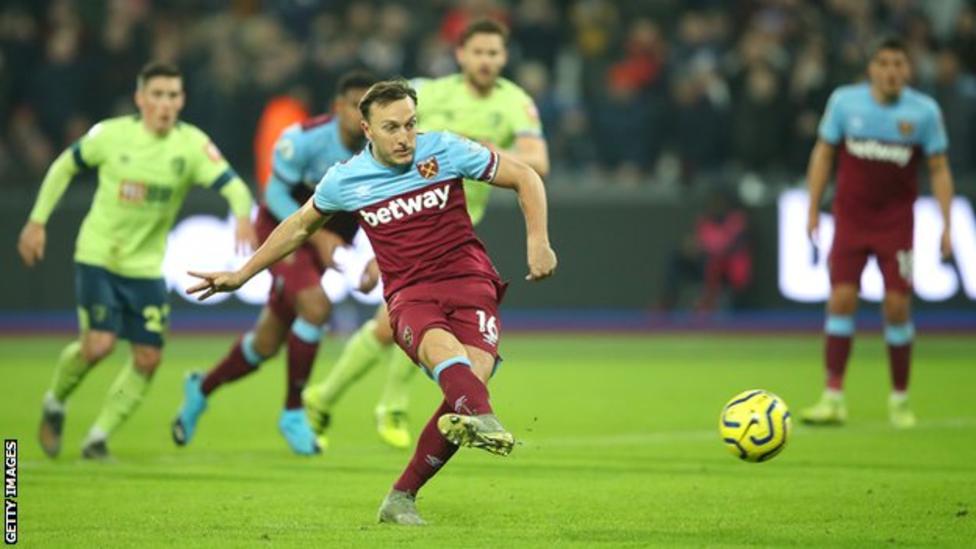 Nobel’s penalty goal takes him to fourth on the Premier League’s penalty takers Hall-of-Fame a position he shares with Man City’s Sergio Aguero with 26 penalties scored so far in the league.

West Ham climbed up to 16th while Bournemouth dropped off to 18th on the log.