An employee of cable TV provider, DSTV has sacked one of its employees who had an encounter with Radio personality, Daddy Freeze.

The sacked employee who took to social media to express her anguish at the situation, explained that she was a call centre representative with DSTV Africa until the encounter with Daddy Freeze.

She stated that the Radio personality called in on July 5, requesting to be reconnected to DSTV Premium xtraview which had expired.

She said upon checking the account, it was discovered that he did not complete the subscription amount required for the service.

She thereafter informed him of the situation but he started to fume and rant, according to her.

The former DSTV employee stated further that the line cut while Daddy Freeze was still talking and she didn’t bother to call back because it was a routine issue.

The virtual celebrity however called out DSTV on Instagram claiming that the call representative hung up on him.

This attracted the attention of management which traced the call and promptly fired the employee. 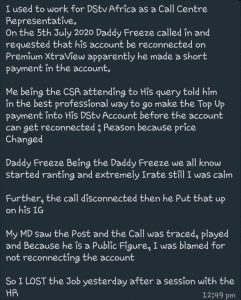 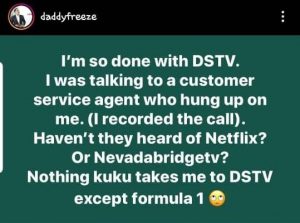