Governor Ron DeSantis has authorized the Florida Department of State to open an investigation into Facebook’s alleged election interference through its whitelisting program.

The governor stated this in a letter dated September 27 sent to Florida Secretary of State, Laurel Lee.

The governor said in the letter that findings published by the Wall Street Journal suggest the tech giant might have violated Florida election law.

Wall Street Journal earlier in the month published an investigative story, citing internal Facebook documents, which suggests that the social media giant grants about 5.8 million high-profile users, including politicians and journalists, immunity from some or all of its content rules.

The report stated that most Facebook employees have the power to add users to the XCheck system for whitelisting status, a term used to describe high-profile accounts that don’t have to follow the rules. But the Journal viewed a 2019 audit that found Facebook doesn’t always keep a record of who it whitelists and why.

As the XCheck roster includes most government officials, but not all political candidates, creating an advantage for incumbents. Some Facebook employees worried that discrepancy, which is most prevalent at the state and local level, could draw accusations of favoritism.

According to DeSantis, whitelisting certain public profiles creates two classes of speakers, empowering the privileged class to “manipulate our elections with impunity”.

“The thought of Facebook clandestinely manipulating elections is an affront to the basic principles of our republic,” DeSantis said. “We the people have the right to choose our representatives, whether or not Silicon Valley approves.”

“Floridians deserve to know how much Big Tech has influenced our elections,” DeSantis wrote on Twitter as he shared a copy of the one-page letter Monday.

See copy of the letter below: 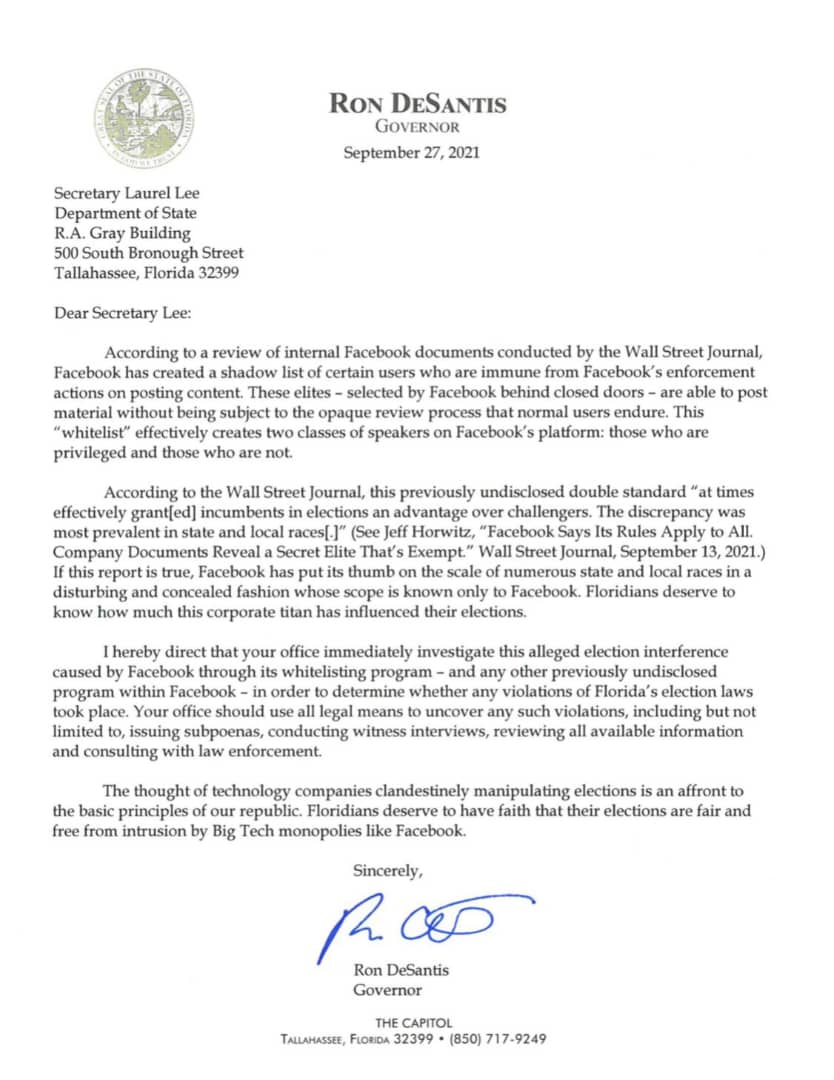 Defection: “I’m glad to be where I am now” – Fani-Kayode tells Orji Kalu