Emirates Airlines is reported to have rejected the Nigerian currency from travellers to Brazil. The airline is said to have demanded credit card mode of payment from passengers at the Murtala Muhammed International Airport in Lagos.

According to sources, the Emirates office in Lagos confirmed that the credit card mode of payment is the company’s policy, although it did not explain the reason behind it.

An official of the airline, Babatunde Yahaya explained that the new policy was in line with a memo issued to them demanding that tickets issued on Emirates, for passengers travelling from Nigeria to Brazil must be paid for with credit card and not cash. 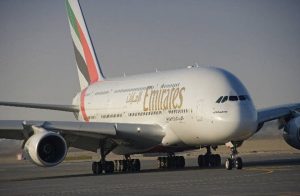 The Nigerian Civil Aviation Authority (NCAA) was contacted and its spokesperson Sam Adurogboye said the action was contrary to the Bilateral Air Services Agreement (BASA)  between Nigeria and other countries as contained in article (8) 4. He also assured that the NCAA would investigate the development with Emirates and act accordingly.

Coca-Cola System to invest N560bn in 5 years in Nigeria

How to build a successful sustainable business in Nigeria