A 12-hour-long Twitter space brought the black community to a standstill yesterday when the topic was raised, “How Does Immigration Benefit Black Americans?”

This space was hosted by Mel, and co-hosted by a certain Tariq Nasheed, who’s popularly known for his hit single, “Wash Yo Ass”.

Tariq Nasheed, however, was the main speaker on this space and he had a lot to get off his chest. So much that he has written a book titled, “Foundational Black American Race Baiter”.

The space gained a massive amount of publicity with over 30,000 listeners and quite a number of speakers, including celebrities.

The argument centred around the belief that immigrants from around the world coming to the US are taking the piece of cake meant for the ‘Foundational Black Americans’.

According to Tariq’s postulations, Foundational Black Americans are Americans whose ancestry can be traced back to slaves shipped to the Americas, from Africa.

He also stated that his ancestors not only built America; they fought and died for the rights of all black people in America and now the offspring feel sidetracked and disrespected by African immigrants who are only able to live and work in the US because his ancestors died.

He was also of the opinion that African immigrants take jobs and other opportunities out from under the Foundational Black Americans and are therefore required to at least pay homage.

Amongst his list of entitlements, he also thinks that lands in Africa should be given to his people.

He equally questioned why Africans could not replicate the progress they bring to America in their own homelands, as a counter-argument to the claim that African immigrants have been a huge part of the progress and prosperity of the black community in America.

Many Nigerians spoke to counter his claims but none of them was given the opportunity to complete their thoughts as the host was always quick to kick them out at the point where they would be able to expose the faults in Tariq’s thought process.

A lot of Nigerians resorted to tweeting their thoughts instead or simply luring the host into giving them the opportunity to speak only to hurl insults at him in English, Yoruba and Igbo. 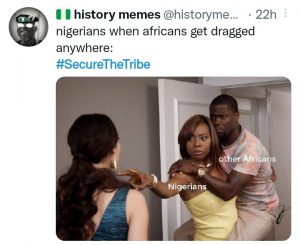 While some were of the opinion that this space was an utter waste of time and the black community should focus on uniting for better causes, a few others described this space as embarrassing. 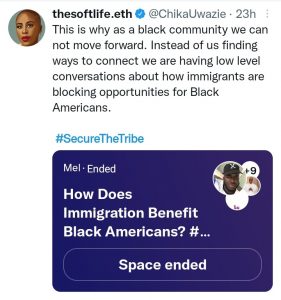 Perhaps the smartest perspective regarding this space is that it is necessary that the black community has discourse like this.
Not only does it serve as an exposé, but such conversations are also needed if any progress is going to be made.

One can argue that this may be one of the very few times the black American community and Africans have engaged in open discourse on a scale such as this. The narrative notwithstanding, this spells progress.

Hopefully, people in these communities will begin to think about the way forward and bridge the gap between both communities.

They Have Eyes But Cannot See. Pity! By Femi Adesina