Give her the balon dor! Wang Shanshan Scores 9 Goals In 29 Minutes At The Asian Games

Lionel Messi, Neymar, and Cristiano Ronaldo step aside — the hottest and most prolific striker in world football at the moment is China’s “Nine-Goal Diva” Wang Shanshan. She scored an astonishing 9 goals in 29 minutes at the ongoing Asian Games.

Wang earned that sobriquet from Chinese fans and media after coming off the bench to wreck havoc in a 16-0 demolition of Tajikistan on Monday at the Asian Games in Indonesia.

The free-scoring forward has found the net a total of 11 times, netting in the 7-0 opening victory over Hong Kong and adding a towering header as China’s women beat formidable North Korea 2-0 on Wednesday to top their group and make the quarter-finals in style. 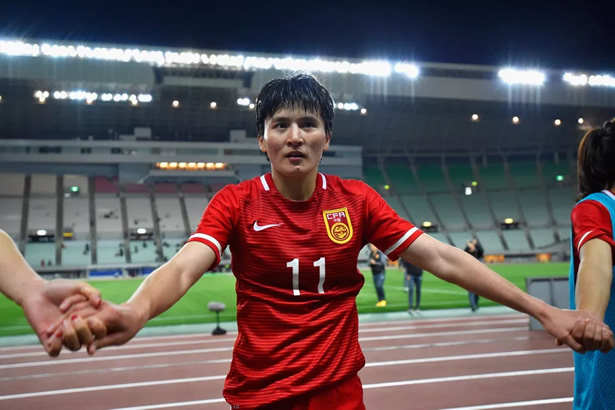 China’s women football team, yet to concede a goal, are being feted back home and 28-year-old Wang, in particular, is making headlines for her jaw-dropping prowess in front of goal.

There have been tongue-in-cheek suggestions that she could be the answer to the goal-scoring problems of the Chinese men.

Wang’s sizzling form is all the more surprising because prior to the past week she was hardly prolific, although she did catch eyes by scoring a backheel volley against South Korea last year — the kind of exquisite strike that Messi and Ronaldo would be proud of.

Against the North Koreans, midfielder Wang Shuang, who recently signed for Paris Saint-Germain’s women’s team, opened the scoring in the eighth minute, finishing off a fluid passing move.

“China’s women really have the chance to win the gold medal. The team is blessed to have Wang Shuang and Wang Shanshan in this era,” said one fan on Weibo, China’s equivalent of Twitter.

China’s evening ended on a sour note, however, after substitute Zhao Rong was sent off at the end and coach Jia Xiuquan followed her for complaining to officials.

China’s men play Saudi Arabia in the last 16 on Friday at the Asian Games, although they have struggled for goals in international football in recent times.

John Cena’s new looks will leave you in awe