The Naira mysteriously appreciated on Google Search yesterday, making one dollar equal to 184 Naira. This came as a shock to many Nigerians as the gain was too rapid to be true. Naira has been between 360 and 365 to a dollar for over three years. Many even formed opinion that it must have been an attempt by the Federal Government to persuade Nigerians to vote for the current administration, being the eve of the presidential election.

However, Google has since fixed the error, returning the exchange rate to 361 Naira.

While reacting to the glitch, Google wrote,  “we’re aware of an issue causing inaccurate conversions for Nigerian Naira currency, so we will remove the conversion one box from appearing in search results until we are able to diagnose the issue.” 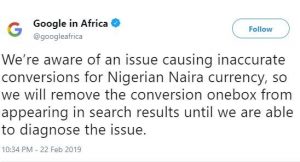