A man named Victor Ojiaku has been arrested by the Nigerian police for allegedly beating his wife mercilessly and then stabbing her in her private part with a broken bottle after accusing her of sleeping with a teenage boy who works for him.

Ojiaku, an automobile parts dealer, attacked his wife, Faith Ojiaku, 27, a mother of three at their home in White Sand, Isheri-Osun in Lagos State last week. 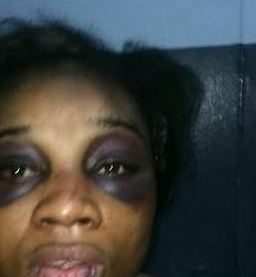 Faith was kept locked up for two days by Victor, making it impossible for her to call any family member or friend for help or to seek medical attention.

When she was eventually allowed to seek medical attention, she used a doctor’s phone to call her sister who in turn called the Lagos State Domestic and Sexual Violence Response Team, who have since taken up the case.

The man appeared at the Ejigbo Magistrates’ Court last week where he was granted bail and the case was postponed till the end of January. He is also facing charges for attacking his teenage worker who he accused of sleeping with his wife.

He is facing a six-count charge bordering on grievous bodily harm, threat to life and assault.