When it comes to listing the greatest rappers of all time, it seems no one can get it right. No matter how reputable you or the media house that attempts to compile the list may seem. That is why the heavy backlash international media house Billboard is currently facing doesn’t seem off.  Billboard in its ‘wisdom’ listed rappers in their opinion were the greatest of all time and left out some of rap’s most respected personalities.

Diehard fans, music nerds and critics love lists. But in rap, rankings like this take on a special level of import: aside from moving a crowd (shouts to Rakim), MC means proving you’re the best. In no other genre do artists so blatantly express their desire to outdo competition. That made Billboard’s editorial list a more high-stakes undertaking than usual. Many favourites — Kane, Drake, KRS — didn’t make it, and each of those omissions hurts deep down. Note: we’re ranking these folks as MCs, not artists. That’s why Dr. Dre and Kanye West, for example, two legendary producer-rappers who don’t match the mic skills of those listed here, were left out. Even Tupac, perhaps the most influential rapper ever globally, is arguably known more for great song writing than dominant bars.

Obviously not satisfied, the likes of Snoop Dogg and Jermaine Dupri amongst others have voiced their objections to the list. See their thoughts below:

“This is so disrespectful. !! Whoever did this list need a swift kick in the Ass. No. Tupac. Come on cuz . Jus my opinion” (sic) Snoop wrote on Instagram

Yo @billboard am I reading this right! No 2 pac or snoop dogg on the greatest rappers of all time list? (sic) Jermain Dupri wrote on Twitter

Jay Electronica went even further. Tweeting photos of the alleged writers of the list 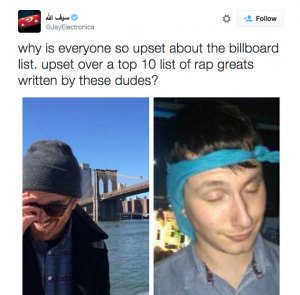