It really does seem to be the year of deaths. With the world still reeling from the death of Prince, the music industry has been hit with yet another untimely demise.

The artiste was 66 years of age.

He was playing the Festival des musiques urbaines d’Anoumabo (FEMUA) when he collapsed.

Organisers from FEMUA later confirmed Papa Wemba had died during a press conference.

“He sang the first and the second song. While singing the third song, he collapsed.

“I was following the concert live on television. I saw the dancers surround Papa Wemba. I thought it was a scene for the concert.

“But then I see people from the Ivorian Red Cross pop up on stage.

“Suddenly we cut the signal of the Ivorian television. I tried to talk to call the manager of Papa Wemba abroad, Cornelie.

“He told me that Papa Wemba fell during a concert.

“I remember ten minutes later, I was told that he is in intensive care. I call thirty minutes after, Cornelie told me that Papa Wemba passed away.”

This was the last image of him many people saw 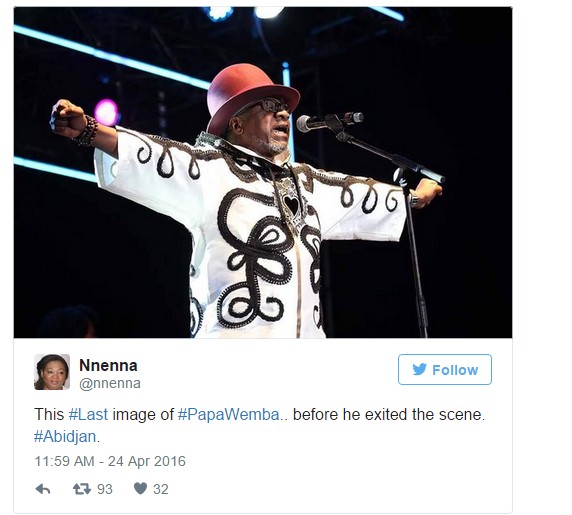 You can see the video of his shocking collapse and demise below.