EFCC’s acting chairman, Ibrahim Magu, has stated that the commission’s participation during the elections was indeed important because something had to be done to the increasing rate of vote buying and other forms of electoral irregularities in the country.

“During a program organized by Bond FM, The EFCC boss stated: “Let me first establish that the EFCC is apolitical. Our involvement in the last general election should be applauded by well-meaning Nigerians.

“Vote- buying and inducement of voters by politicians are unfolding vices stealthily creeping into our electoral process. Vote-buying, in particular, had never been part of the electoral process in the country and we must all frown at it. This is the reason we have resolved to nip it in the bud.

“In the days leading to the election, we engaged in vigorous campaigns against those vices and enlightened the populace on the dangers of involving in such acts. We made them see the reason why they should not sell their conscience.

“I can confirm to you that the intervention recorded a lot of success. Many people were caught in the act in various parts of the country and I assure you that they will be prosecuted accordingly .”

While being represented by Oyewole Ayo, the commission’s Head of Public Affairs Directorate, the EFCC boss equally condemned the activities of internet fraudsters in the country. 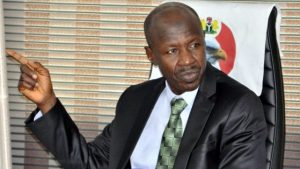 He said, “they have continued to give the country a bad name.”

He then mentioned that the EFFC is prepared to make sure that all those involved would be brought to book.

“The Commission is poised to conquer them. The Executive Chairman, Ibrahim Magu, has asked me to send a red alert to them that they should give up their criminal activities.

It is sad that some youths, especially undergraduates of higher institutions in the country, are dissipating their energy on a venture that can jeopardize their future. The clampdown is not only in Lagos; it is across the country, especially as we have now opened more offices in some of the states. ”

“I call on Nigerians, wherever they may be, to be the eyes and ears of the Commission. The EFCC can’t be everywhere, so, we urge you to join hands with us to sanitize the country. As we have always said, there is a reward system in place for any genuine information by a whistleblower,” he explained.

Also, read: Police killing of our men unjust but take it as act of God – NSCDC tells personnel

“She wanted me”- private teacher insists after defiling underage girl