A 30-year-old man is currently in police custody after he infiltrated a hospital, stole a N1.7m microscope, and sold it out for N5,000 only.

The suspect, Hamza Sani, is said to have carried out the crime alongside four others in the Malunmfashi General Hospital in Katsina State.

According to Northern City News, Sani was the first suspected to be arrested in the case. However, his arrest helped the police in nabbing his partners namely Magaji Yusuf, 36, Kannala Aliyu, 33, Emmanuel Ukelere, 48, and Saidu Shehu, 40.

In his reaction, Katsina’s Police Public Relations Officer, Gambo Isah, mentioned that Sani and the four other suspects had been in the act of robbing hospitals and carting away their equipment, for a period of time. 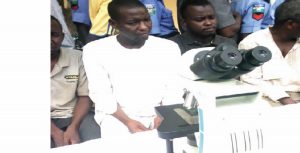 He stated that Sani had already given a confessional statement on his involvement in the group’s activities.

The officer explained, “On Saturday, April 13, 2019, around 6am, the command succeeded in smashing a syndicate that specialises in theft of hospital equipment.

“Nemesis caught up with Hamza Sani when he was arrested at Malumfashi General Hospital, Malumfashi, in possession of stolen hospital equipment. In the course of the investigation, Sani confessed to various related crimes in the hospital and named the four other suspects as his cohorts.”

When he was subsequently paraded at the Katsina Police headquarters, Sani further confessed that he needed to raise money for the treatment of his sick wife, so that prompted him to sell the device for N5,000.

Also, read: Jussie Smollett is a “third-rate actor” who disgraced our nation – Trump

Scientists plan to grow human organs in pigs for transplantation