RECESSION: Man Murders Wife And Child Because He Couldn’t Feed Them

Dominic Iyayi Ogah, a 40-year-old man from Okpoma village in Yala Local Government Area of Cross River state, has murdered his wife and their only child.

Ogah is alleged to have committed the act on October 8th 2016 in Mpape, Abuja.

It was learnt that the suspect, who slept with his wife and child together in their apartment, suddenly woke up at night and stabbed them both.

According to the Commisioner of Police, Federal Capital Territory Command, Mr. Mohammed Mustapha, the suspect, took the dead victims to a primary school close to his house and dumped them there with a written note beside the dead bodies.

Having done the evil deed, he ran off into the bush and went into hiding.

A man identified as his neighbor, Destiny Onwusuaka, noticed a trail of blood which he traced to Mr Ogah’s house.

David said he searched the house but only saw a pool of blood with no bodies, he went further in search of the blood trail and found the bodies where the husband had dropped them.

EditA search was declared for Mr Ogah and after four days, he was apprehended at a farm on October 11, 2016.

At the Criminal Investigative Department of the FCT police command, the suspect when asked why he perpetrated such an act said, “I don’t have a job, I cannot feed my family, I can only feed myself, and God should forgive me for what I have done.”

“I only know what came to my mind, it was frustration that led me to stab my wife Omago, and only daughter, Blessing to enable me survive in my life.” 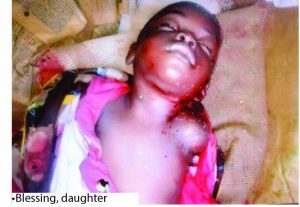 Mustapha said that Mr. Ogah, would be arraigned in court and necessary actions will be taken against the suspect.