Mother allegedly applies Sniper on son’s hair to kill lice, kills him instead

A child has allegedly lost his life after his mother misguidedly put Sniper on his hair.

According to the Twitter user, @Aproko_doctor who shared the story online, the Sniper was supposed to help in killing lice on the boy’s hair.

Sadly, the insecticide damaged the boy’s scalp in the process and killed him in the end. 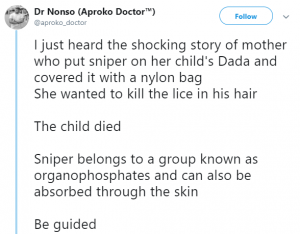 The Twitter user also wrote, “ Absorption through the skin can be affected by temperature. Covering his hair may have increased the temperature of the area and increased the speed at which his scalp absorbed it.

“That said, do not forget that your skin is important and absorbs. Be careful what you put on it.”