Mum snubs trolls, vows to breastfeed her kids (7 and 4) as long as possible

Last June, an Australian mother, Lisa Bridger, received several backlashes when she revealed that she was still breastfeeding her two children, Chase and Pheonix. Chase was 7 at the time, while Pheonix was 4. Lisa explained that the two kids are autistic and claimed that when they suck her breasts, they become calm. However, other internet users bluntly turned down her explanations, stating that she had to be a pedophile to have carried out such an unreasonable act.

Some accused her of incest and child abuse. The attacks kept rolling in but she didn’t react to any.

Today, the mother of two posted an open letter to those who have been criticizing her, reiterating that she would not stop breastfeeding her two children until they are no longer interested. 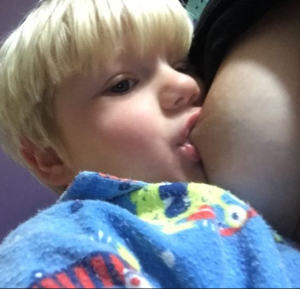 “To the adults who have commented that I am sick and need to get help, there is nothing mentally wrong with me, I am only doing what is natural.

It’s not a sexual act, I’m not a pedophile which is what quite a few have suggested.

My son is very independent, self-assured, not damaged. His friends and peers don’t tease as they have been educated in the fact that what he is doing is ok.

Watching and seeing all you adults bully and abuse me, telling me what I need to do for your comfort, overriding my child’s comfort, I can see why so many children bully these days.

Breast milk contains some amazing things, antibodies, white blood cells, vitamins that my body produces and transfers to his, and no these nutrients don’t just disappear because he’s older. Breastfeeding offers him comfort and security among other things.

I don’t need a man, it’s not a sexual act, you can’t force a baby or toddler or older child to breastfeed, in fact, I’m ready for him to wean whenever as I have been for quite some time.”

She also explained that since her son eats normally and wears his clothes by himself, she is certain that he is actually developing, as against what her critics have been saying about the chances of his development.

How Muslims Stood Against Me In My Time of Need- Buhari

Submitting to your husband involves your money too – Folorunsho Alakija advises…

Farooq Kperogi: ‘I Used to Think “Bianca” and “Biafra” Were Igbo Words!’

Farooq Kperogi : Nigerian Corruption is Embedded in this Mangled Expression