Naomi Osaka has emerged as the winner of the 2019 edition of the Australia Open. The Japanese athlete defeated Petra Kvitova 7-6 (2), 5-7, and 6-4 in their final fixture. The win means she has now claimed the title back-to-back, since she won in the last edition as well.
Naomi is equally expected to become the No 1 female tennis star when new rankings are released on Monday. The 21 years old has also become the only Japanese tennis player to have won the competition on two consecutive occasions since the introduction of computer rankings. 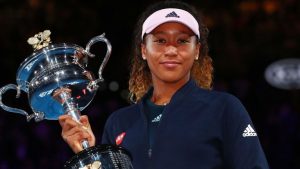 While reacting to her victory, Naomi stated, “I’ve always dreamt of being in this position and I am honored to be part of the elite group of players who have reached the No.1 ranking.”
Naomi’s consistency has kept everyone in awe as she defeated the current No 1 tennis star, Serena Williams in the final match of last year’s edition, going ahead to win that one as well.
Her history-making win means she is the only other female tennis star to win two major tennis competitions in a row.
WTA CEO and chairman, Steve Simon also expressed his admiration of Naomi. He said, “To achieve the WTA World No.1 ranking is an incredible accomplishment and I would like to congratulate Naomi on realizing this so early in her career.”

Suspension Of CJN Onnoghen: Nigeria Is Now Germany In The Wake Of The 1933 Reichstag Fire