Dr Wolf claims jabs are a "software platform that can receive uploads" and lockdowns are anti-democratic.

American author and journalist Naomi Wolf have been suspended from Twitter after spreading vaccine misinformation.

One tweet claimed that vaccines were a “software platform that can receive uploads”.

She also compared Dr Anthony Fauci, the top Covid adviser in the US, to Satan to her more than 140,000 followers.

Most recently, she claimed that urine and faeces of people who have received the jab need to be separated from general sewage supplies while tests are carried out to “measure its impact on non-vaccinated people through drinking water”.

Many social media users have reacted positively to news of the author’s Twitter suspension. 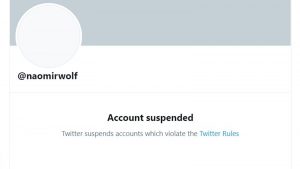 Others, however, see the move as a blow to freedom of speech and have called for her account to be reactivated.

In 2019, the US publisher of a book by Dr Wolf cancelled its release after accuracy concerns were raised.

During a BBC radio interview, it came to light that the author had misunderstood key 19th Century English legal terms within the book.