“Nyako should watch his mouth” – FG 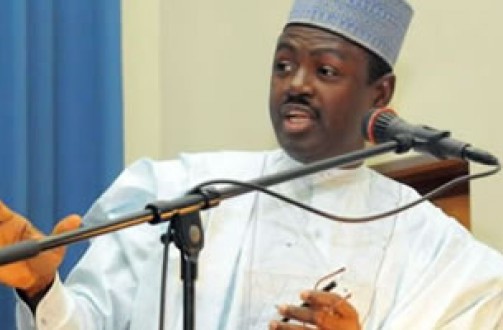 The Federal Government has continued to condemn the divisive statements being made by Adamawa State Governor Murtala Nyako which the administration feels is capable of causing insecurity issues in the country.

Addressing the remarks of the Governor recently, Minister of Information, Labran Maku called on Nyako who is former Chief of Naval Staff to watch his utterances.

“This nation deserves security at this time. Even in the heat of crisis, you hear some irresponsible comments coming from highly placed people, including a governor.

“Now this nation is in need of unity, but the way we are playing to the gallery, we are making irresponsible statements. We are making statement that will divide the country; statements that are setting the citizens against security services and government,’’ Maku said.

Maku said such a statement should not come from an elected leader, not to talk of one who was once a military officer.

“When these statements come from people we believe should be leading the course of unity, appreciating the great job the security are doing, it is very unfortunate.

“If only Nigerians understand that as we sit in this hall, our security people are out there sleeping in the bush, day and night and getting killed in the course of maintaining the security of this country…

”But what we see is that people who have little knowledge on how security services are rendered, will just open their mouths and make statements that create panic in the country, and this is very unfortunate.

”The kind of things being said by the governor of Adamawa State at this period is very unfortunate. Nyako is the former Chief of Naval Staff, he is someone that had worn the uniform before. For him to publicly incite the people against the security forces of this country is the height of irresponsibility.

”When people reach a certain age they should watch their utterances. For people that have known the difficulty this country is going through and the kind of effort being made by the Federal Government, to come out to make those statements that divide the country at a point that we need national unity and national healing, is grossly irresponsible.

“People grandstanding, people playing to the gallery, people making inflammatory statements that divide public opinion, that cause confusion are people that are anti-Nigeria. Divisive statements must be condemned at this time and I think that we all have a responsibility to this country,” the minister said.

CONFAB: Delegates in near fisticuffs over resource control, Presidency

Military dissociates self from anti-democratic moves, pledges loyalty to government