Brazilian footballer, Douglas Costa has been in an accident. Although, the winger, who also plays for Juventus, is said to have been unhurt after stepping out from his fatally damaged car.

Mail Online reports that the accident happened along a motorway in the northern part of Italy.

Juventus and Brazilian footballer,  Douglas Costa reportedly escaped unhurt after being involved in a huge car crash in Italy.

Costa was traveling back to Turin when his Jeep collided with a Fiat Punto. The driver of the other car was, however, not as lucky, as he had to be taken to the hospital to treat some injuries that were caused by the accident.

Officers of the Novara Est traffic police have since begun an investigation on the incident in order to understand how the accident came to be.

According to Mail Online Sport, the incident occurred on Monday on a motorway in northern Italy as the forward was returning to Turin. His Jeep Cherokee was involved in a collision with a Fiat Punto, with the driver of that car taken to Biella Hosptial for minor injuries.

The accident is being investigated by the Novara Est traffic police as they seek to find out how the crash started. 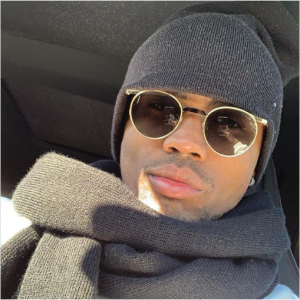 As seen above, the Juventus star shared a picture of him inside the car on his Instagram page, some hours before the accident.

Scroll down to see more pictures from the accident scene. 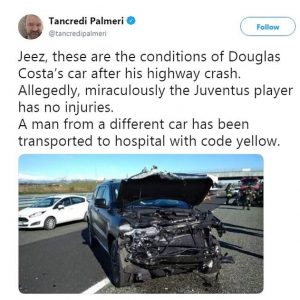 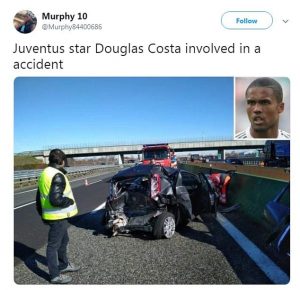