Officers of the Lagos State Police Command have apprehended two men, Razaq Oluwaseun Oke, 28, and Don-Chima George, 25  for an alleged case of rape. Although investigations into the case are currently ongoing, the two men allegedly carried out the crime at a hotel in Lekki Phase One area of the state.

After their arrests, the officer in charge of the case released a statement which revealed that the two suspects invited their victim, 23, to a club last Saturday. However, they had other plans she was not aware of. As they clubbed, the suspects supposedly added a substance to the lady’s drink which weakened her, making her extremely dizzy later on.

When the duo realized that the drug had successfully done its job, they took the lady to Dallankester Hotels in Lekki which belongs to the father of one of the alleged rapists, Chima. 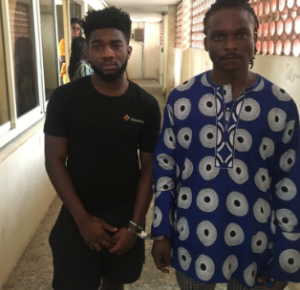 It was reported that the Chima and Rasaq raped the lady repeatedly and also filmed all the acts they performed on her.

When the drug was worn out, the abused lady woke up, challenged her abuser, and when they continued to deny the incident, she called her uncle who quickly rushed to the scene with policemen from Marako Division.

While searching the suspects. The Divisional Police Officer who led the squad to the hotel, took Chima and Rasaq’s phones, went through them and saw video recordings of how they abused the lady who was indeed unconscious.

The police commissioner has since asked that officers of the Gender Section of the Police Force to conduct a thorough investigation and prosecute the suspects so that others may learn from it.

Photos: Man dies from electrocution while charging and using earphones

7 suspects arrested as Customs seize contraband worth N300m in Owerri