It was the end of the BBNaija road for Sheggz Olu a.k.a Big Sheggz/Mr. Ikoyi last night as he got evicted for garnering a whooping 13.26% votes from viewers. 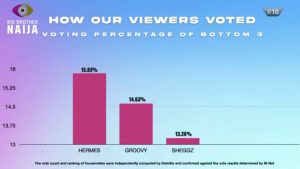 Due to his cockiness and toxic behavior toward Bella, another housemate, the former housemate was despised by all. Additionally, he was alleged to have been abusive toward his ex-girlfriends before entering the Big Brother Naija house. This is troubling given how he behaved on national television, potentially confirming some of the accusations.

This is what sheggz did to someone's daughter and you think I should pity him?.
NO WAY!!. He must seek help ,because my foot won't leave his neck.#Bbnaija pic.twitter.com/erusjXjAcD

He was nicknamed Mr. Ikoyi and dubbed the most hated housemate in BBNaija history, surpassing both Boma and Tega from the Shine Ya Eye Season.

They really booed sheggz …omo nobody will take his script inside that house next year 😂😂😂😂#BBNaija pic.twitter.com/WiPbAG7Zuu

Viewers were agog when Sheggz was evicted and the reactions are nothing short of hilarious.

Here are some of the most hilarious social media reactions to his eviction.

Guys avoid Ikoyi tomorrow, there would be mad traffic. Big Sheggz is back

BREAKING: Crime in Ikoyi set to hit an all-time high this week as Policemen posted to that area of Lagos abscond to welcome Sheggz from the airport. Sources say they can't wait to scream 'Big Sheggz'. More to follow. #bbnaija

You have less than 60k IG followers, not sure about Twitter because I honestly don’t care

Nobody rates you out here

We all are so happy you’ve been evicted.

We hope Sheggz does better outside the house and learns from his mistakes to become a better man and maybe even a better lover.