Bankole Wellington otherwise known as Banky W is a handsome man and has legions of female fans. Many must have at one point or the other expressed their willingness to marry him.

But this woman went about it in a rather unique way. Her name was not mentioned or posted. The woman according to Banky W’s posts on social media has been seeing visions about him. According to her, he is destined to be her husband.

She sent an email basically stating what kind of person she is and so on. It reads like a CV.

If Bank W responded, he didn’t post his response for us to see, but if we were to take a guess, we’re sure she wouldn’t be getting ‘the job’ 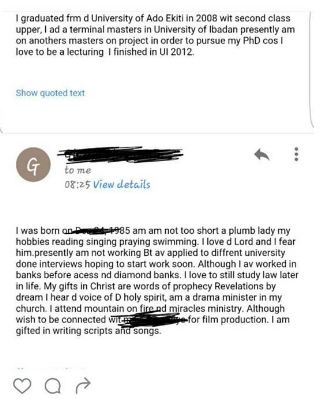 UK approves N14bn to assist Nigeria in war against insurgency