Security officer butchers colleague, cuts off his hand for ritual in LASPOTECH

A security officer working with the Lagos State Polytechnic, Cletus Wilson, has allegedly killed his colleague, John Okoro in order to use his body parts for ritual purposes.

Cletus is said to have been manning the security post of the institution’s Computer Engineering Faculty until the time he committed the crime.

Reports revealed that he lured the deceased, John, into a secluded bushy area within the school premises.

As soon as he was sure no one could see whatever would transpire between them, he hit the unsuspecting young man on his head with a rod, rendering him unconscious in the process. 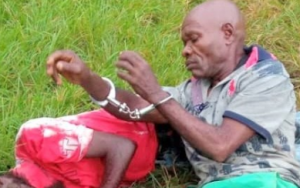 Afterward, he proceeded to kill him and cut off one of his hands.
His luck then ran out as he was about to elope with the body part. Other security personnel in the school nabbed him in the process while the school authorities contacted the nearest police station.
Cletus was subsequently handed over to police officers as they arrived at the scene of the incident.
In his explanation, the Police chief in the police station, Adekunle Omisakin, stated that further investigations would be carried on the case, and if the suspect is found wanting, he would be arraigned before a law court.

Also, read: 2023: Igbos must hold on to Yorubas or Hausas not to miss out – Clarke