The Nigerian Senate has unraveled reckless mismanagement of funds within the Subsidy Reinvestment Programme (SURE-P).

During a presentation at the National Assembly, chairman of SURE-P, Dr. Christopher Kolade presented documents to the lawmakers Joint Committee on Petroleum Resources which showed that N2.2 billion had been spent on a line item called “secretariat services” and another N75 million was spent on “tours” inspecting projects nationwide within a period of four months.

SURE-P was set up by the Federal Government in order to manage the savings from the partial withdrawal of subsidy.

A member of the committee, Senator Benedict Ayade, singled out the documents pertaining to the reckless expenditure, calling the amounts unacceptable. 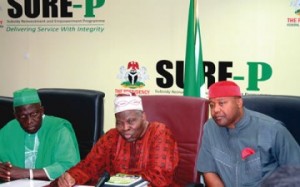 Dr. Kolade could not totally explain the expenses and promised to furnish more details at a later time.

Committee chairman, Senator Magnus Abe said, “It is clear that some of your expenditures are questionable, while your explanations are unsatisfactory. We can’t work with figures without details. Give us documents to show us how you spent the money. You’ve also not told us the details of how much you claimed to have received from donor agencies.”

Senator Ayoade accused the committee of not empowering Nigerians by giving away contracts to multi-nationals and not focusing on housing and agriculture.

He said, “From the paper you gave us, most of the railway projects contractors are multinationals. Spending N58 billion for these multinationals amounts to giving away jobs that ought to have been given to Nigerians,” he said.

“The philosophy of SURE-P is to empower Nigerians. Also, in your subcommittees, you don’t have any committee on agriculture and housing. It means you’re not doing anything on these two important sub-sectors of the economy,” he added.