The #SaveMayowa saga is getting murkier and murkier by the minute with new allegations coming to light that actress Toyin Aimakhu and Aramide Kasumu founder of Lifestake Foundation wanted some part of the money raised.

The following tweets come from a Twitter user Soliat Tobi Bolaji who alleged she was with the family all through the period the allegations were being raised. 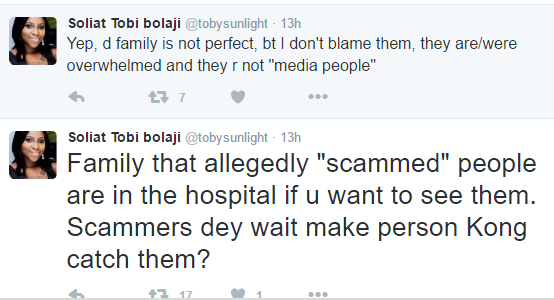 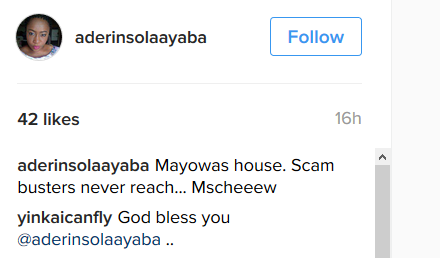 Also to further bulk up the case of the family, a leaked phone conversation between Mayowa’s brother and a caller has been posted on abiyamo.com, a transcript also obtained from the site can be read below.

CALLER: I heard a rumour from some unfortunate people saying that Mayowa’s case is a scam, how far, is it true?  How is Mayowa feeling now, has she travelled?

Mayowa Ahmed’s brother: Are you a stranger to Mayowa?

CALLER: Of course I do know her very well.

Mayowa Ahmed’s brother: Good, those of you who know her and her familiar with her case should tell everyone that it is a lie.  They (rumour mongers and accusers) are insane.

Mayowa Ahmed’s brother: Thank God you met her, or didn’t you meet her?

CALLER: Of course. I lived with her (Mayowa).

Mayowa Ahmed’s brother: And you are aware of her regular crises and all her afflictions, right?

Mayowa Ahmed’s brother: Why do we have to lie about the whole thing, do we (Ahmed family) look like impoverished people? Or are the accusers unfortunate people?

CALLER: Ah, it will not be well with them (the accusers and rumour mongers). When people have donated over N32 million naira.

Mayowa Ahmed’s brother: It was God that made it all possible and we did not even know that people will turn out like that. I hope you understand?

CALLER: You know the funniest part of it all? It was when I was hearing what all what Mayowa herself was saying.

Mayowa Ahmed’s brother: What did she say?

CALLER: As in, if you see the videos they uploaded with what she was saying.

Mayowa Ahmed’s brother: What did she say?

CALLER: (inaudible) I will share some of her videos with you.

Mayowa Ahmed’s brother: Hello, when did she say that?

CALLER: Hello, can you hear me?

CALLER: Both pictures and videos.

Mayowa Ahmed’s brother: What did she say in them?

Mayowa Ahmed’s brother: Ehn, everybody is aware of that already. Nobody is telling lies. There is no lie in her call for help. She needed help. She needed money, where were we going to get N32 million naira? And she decided to do a video to explain her condition to people. You know the truth of the whole matter? All these foundations, all these people, in the course of that (the donations), different foundations came…

Mayowa Ahmed’s brother: And all these foundations do not work alone. They all want money. Between you and I, people (from these foundations) will come to us and demand for various amounts of money (before they can assist us). You get?

Mayowa Ahmed’s brother: They wanted their own part of the money.

Mayowa Ahmed’s brother: That is the simple truth. That is why you are hearing crazy rumours like that. Even Toyin Aimakhu herself is a thief.

CALLER: Ah, oh, she (Toyin Aimakhu) is an unfortunate person. So she did not release the money?

Mayowa Ahmed’s brother: No, there is money in the account. You understand? You know of the processing and all, you also know that some people do not get help for more than five, six months. You get? So Mayowa was followed by the grace of God for her to be able to raise such an amount of money in less than three days. So we started processing. She will initially go to Dubai (United Arab Emirates). As a matter of fact, our biggest cousin is in the embassy, working on the processing. Assuming we know the outcome was going to be like this, we could have even hastened the processing but where is the money? You can imagine running CT scans for more than five times. You know how much CT scan costs? I did it. I left Lagos to do it in Ilorin because it was cheaper there where I did it for N100,000. In Lagos here, if you do not have N350,000, you cannot do it.

Mayowa Ahmed’s brother: That is not to talk of the series of tests which are even small.

CALLER: You know what happened? They should not release the money if it is in Mayowa’s account.

Mayowa Ahmed’s brother: The money is inside Mayowa’s account. Nobody is releasing it and there is no problem. Those of you who are family and friends should let everyone know the accusation is false. We do not have anything to hide. We are doing the processing and it is not that easy.

CALLER: Thank you very much my brother, it will also go live on Abiyamo’s page. I will send it to them.

The Lagos state Police have promised to investigate the matter so that a resolution can be brought to this unfortunate tale.