Coronavirus is spreading among those around US President Donald Trump, with White House adviser Stephen Miller and a top military official infected.

Mr Miller, who has been in isolation for the past five days, announced he had been infected with coronavirus on Tuesday. 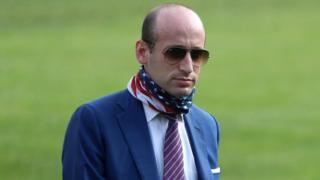 Other officials have also gone into quarantine “out of an abundance of caution”.

In a statement, Mr Miller revealed he had been “testing negative every day” until Tuesday, adding that he was now in quarantine.

His wife, Katie Miller, who is Vice-President Mike Pence’s spokeswoman, contracted the virus back in May and later recovered.

Trump’s White House denied that coronavirus had caused Mrs Glosser’s death, saying in a statement she “died peacefully in her sleep from old age”.

But Mr Miller’s uncle presented a death certificate listing “respiratory arrest” and Covid-19 as “a condition leading” to the cause of Mrs Glosser’s death.

Mr Miller – who writes the president’s speeches – is known for his tough views on immigration.

Adm Ray, vice-commandant of the US Coast Guard, is said to be exhibiting mild symptoms.

While officials who were present in meetings with Adm Ray last week are now self-isolating, none have so far tested positive or displayed symptoms, the Pentagon said.

However, Mr Trump and other White House officials have tested positive for coronavirus in recent days.

The Coast Guard announced in a statement that Adm Ray tested positive on Monday and was now quarantining at home. It added that any Coast Guard personnel who were in close contact with him would also quarantine.

BBC partner CBS News reported that nearly all members of the Joint Chiefs of Staff – a body consisting of senior military officials who advise the US president – were in quarantine after attending meetings with Adm Ray last week.

Armenia: Cardi B Responds To Accusations Of Supporting Terrorists