Twitter has deleted a tweet by the Leader of Indigenous People of Biafra (IPOB), Nnamdi Kanu, wherein he threatened to kill Nigerian soldiers sent to the South-East.

Kanu reportedly tweeted this at 11:32 a.m on June 2 in response to the Federal Government’s planned action against attacks on security formations and other public infrastructure in the South-East zone. 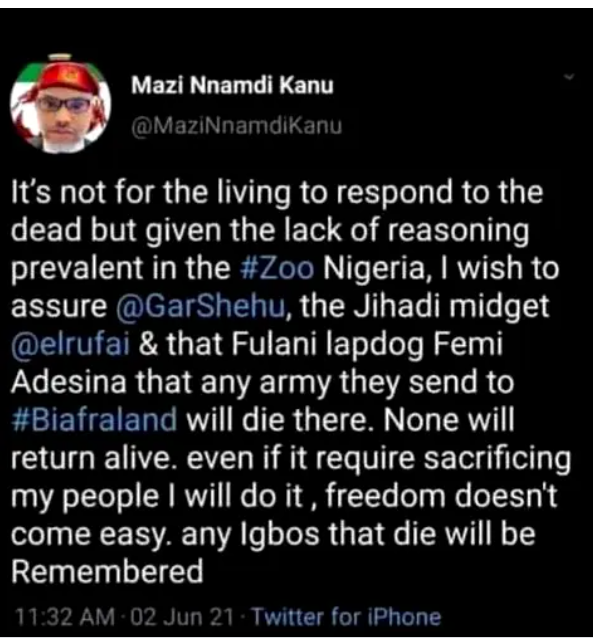 TheCable reported that the tweet was no longer available as of Saturday evening.

Twitter’s action came few days after it deleted President Muhammadu Buhari’s tweet which it said violated its rules and temporarily restricted his account.

Supporters of the current administration faulted the deletion of the president’s tweet which they claimed was “harmless”, charging Twitter to look into Kanu’s activities on its platform.

The Nigerian government announced an indefinite suspension of Twitter’s operations in the country on Friday.

FLASHBACK: I Do Not Subscribe to Regulation of Social Media – Osinbajo

Change: APC should be responsive to needs of Nigerians – Odigie-Oyegun

Boko Haram: “The earlier we crush them, the better” – Al Mustapha