Under Buhari’s nose, stealing is still going on, media is not free to say it – Abuja Archbishop

An Abuja based Catholic Archbishop, John Cardinal Onaiyekan, has lamented that corruption has not ended under the current administration, and in fact, it continues to happen under the watch of President Buhari.

The Bishop decried that tampering with election process is by far, worse than any corruption allegation that may be existing in the country, adding that the presidency should quit controlling the judiciary and let judges handle judicial issues on their own.

While being interviewed by the Catholic Newspaper, Good Shepherd, Onaiyekan berated the sudden increase in the rate of kidnaps and corruption across the country.

He mentioned that there has not been any significant progress as regards the fight against corruption, which the current administration claimed it was focusing on.

According to him, corruption does not only mean the stealing of public funds. 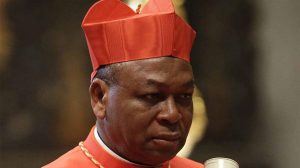 Onaiyekan emphasized, “It is not what I think that the current government has fought corruption to a standstill, it is what everybody sees around us all the time. Everybody agrees now that right under the nose of Mr. President, stealing is still going on.

“The only thing is that the media cannot say it as freely as they used to say it under (former President) Goodluck Jonathan. But the fact is there. “But in my opinion, corruption is not only a matter of stealing money, but there are other things that are worse than stealing money. If a government is not sincere in the things it says to the people, that is gross corruption.

“Rigging election in whatever means is even worse than stealing billions because in the rigging of elections, you steal my vote which has no monetary value; even the complaints that people are having about biased systems of appointment of key officers.

“If you have a situation in Nigeria where Mr. President doesn’t see anybody competent except those who are from his village or religion, then that is gross corruption.”

Reacting to the lingering crisis in the Judiciary, involving former Chief Justice of Nigeria, Walter Onnoghen, the cleric opined, “One thing is certain, things have not been going well at the top level of our government. It is not for nothing that we normally talk about the distinction of the three arms of government— the legislature, the executive and the judiciary.

“And we have a situation where it appears that the judiciary is being totally controlled by the executive. Even if it is for good reasons, at the end of the day, it means that we are exposed to a situation where justices, judges are no longer free to do their work according to their vocation. They will feel that they are under pressure to pass a judgment that would please certain people. “Today, it is government, tomorrow it will be another person. That is why many people are worried about what has happened. And this is not about that gentleman called Onnoghen, he may have been a horrible man.

“Perhaps he was a corrupt judge, well, someone must have recommended him to be at the head of our judiciary. If they are telling us that the entire judiciary is rotten, let them say it clearly. And they will have to tell us how they are going to replace it.”

Censors Board Seizes Pornographic Films Worth N2.5bn In 2 Years