A viral video of Chatunga Bellarmine Mugabe, one of the sons of Robert Mugabe has been trending online as it showed him pouring bottles of Armand de Brignac Ace Of Spades gold champagne over his diamond-encrusted wristwatch at a luxury nightclub in South Africa. 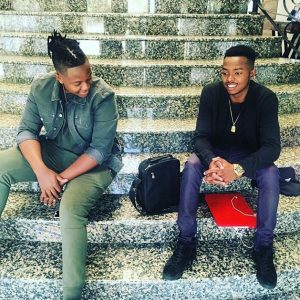 Chatunga Bellarmine Mugabe, Mugabe’s youngest son, uploaded the video to Snapchat hours after bragging that he got the £45,000 wristwatch (over N21million naira) because ‘his daddy runs the whole country’.

Chatunga and his brother Robert Jr, the two sons of Robert and Grace Mugabe, are well-known for their hard-partying lives of luxury.

The footage, filmed in a nightclub in the posh Sandton area of Johannesburg, South Africa, showed Robert’s arm around a girl before the footage cuts to an image of Chatunga’s wrist, complete with watch and gold chain, then champagne flowing over his arm.

The video appeared online just weeks after Mrs Mugabe announced she is suing a Lebanese jeweller for failing to deliver a £1million diamond ring she bought to mark her 21st wedding anniversary with husband, Robert Mugabe.

watch the video below:

While #GraceMugabe is bidding to be Vice President her sons are living it up pouring tax payers money out of a bottle #ThisFlag🇿🇼 #SaveZim pic.twitter.com/QESdlXb4KE