Will Smith and wife Jada Pinkett are one of Hollywood’s biggest couples and probably the biggest black couple.

With two children, Jaden Smith and Willow Smith, and hugely successful careers, the two are considered role models to many.

The two have also reached an enviable milestone as they have now been married for 20 years. The two were married in a secret ceremony on the 31st of December 1997.

The couple met when Jada auditioned for the part of Will’s girlfriend on The Fresh Prince of Belair (she didn’t get it), and had been dating for a couple of years when he popped the question that November. At the time, Jada told People that things got serious fast, “One day we got engaged, and the next day we found out we were pregnant.” So the race was on for the bride, groom, and parents-to-be.

To celebrate the milestone event, Will took to his Instagram to share a throwback photo from their wedding and also write a lovely message on what she had taught him during the marriage.

Read his tribute below.

“20 Years Ago Today we held hands and walked naively down that aisle. Here’s what I’ve learned since.

Love is Like Gardening… I have learned to focus on HELPING you to BLOSSOM into what YOU want to be (into what you were born to be)… Rather than Demanding that you become what my Fragile Ego needs you to be.

I’ve learned to take pleasure in Nourishing YOUR dreams… Rather than wrestling with you to Fulfill my Selfish Needs & Satiate My Insecurities.

Happy Anniversary, My Queen! I am forever Devoted to Nurturing your Deepest Truth.” 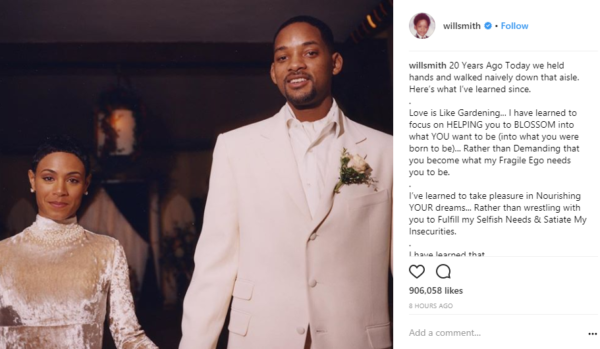