‘They are always in the way’ – Van Persie criticizes teammates 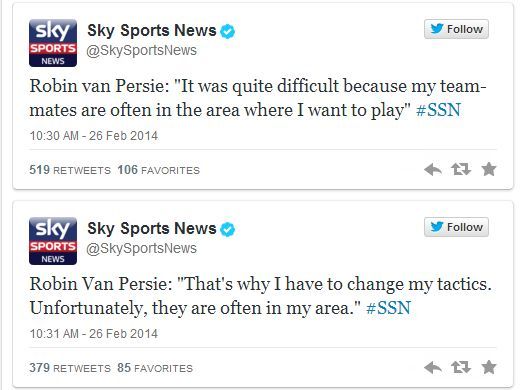 After losing 2-0 to Olympiakos in the last-16 of the Champions League, Manchester United striker Robin van Persie has criticised his team-mates.

The former Arsenal star – who is strongly linked with a return to north London this summer – claims that other United players get in his way.

Van Persie was the only Red Devils player to get a shot on target in the entire match in Athens and that didn’t come until the 89th minute.

It was another woeful display from the Premier League champions, who have struggled to cope with the retirement of Sir Alex Ferguson as manager and David Moyes’ succession.

Van Persie is one of those who is very disillusioned at Old Trafford, with the Dutchman feeling Moyes’ training regimes are archaic and aggravates his injury concerns.

The Netherlands international also feels let down that Ferguson retired just 12 months after the 30-year-old arrived from the Emirates Stadium.

Reports have emerged stating that van Persie’s agent met with Gunners boss Arsene Wenger in January to discuss a return to the English capital.

8 Rules for Remaining Friends with Your Ex Boyfriend