The world heavyweight champion whose father is originally from Sagamu in Ogun state, met with Buhari who is currently in the UK for an investment summit.

Geoffrey Onyeama, minister of foreign affairs; Nìyí Adebayo, minister of industry, trade and investment; Abike Dabiri-Erewa, chairperson of the Nigerians in Diaspora Commission (NIDCOM), were among those with the president when he received Joshua.

The Herald gathered that Joshua has always been proud of his Nigerian heritage. Shortly after reclaiming his titles from Andy Ruiz, jnr, in December, Joshua released a video where he hailed Nigerians for their support. 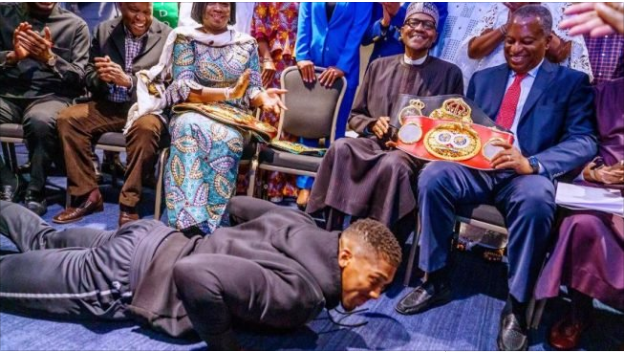 Earlier, The Herald reported that Nigerian born Heavyweight Boxing player Anthony Joshua, proved his originality to many people around the world by speaking Yoruba dialect.

Joshua’s recent victory did not take many by surprise as the heavyweight boxing player only suffered the first defeat of his professional career when he was sensationally stopped by Andy Ruiz in June.

READ ALSO: Sowore: No Christmas for me if my son is not released – Mother Reveals

President Buhari seemed to be very well pleased with Joshua as he took to his twitter handle to express his joy and congratulate the Champion.