Chanel Chin, estranged wife of Oluwo of Iwo opens up on their marriage

By Adebusola Oyerinde Last updated May 2, 2020

It is no longer news Chanel Chin, estranged wife of the Oluwo of Iwo, Oba Abdulrasheed Akanbi, left her matrimonial home back to Canada, her country of origin, with her only child. There have been rumours between the two, however, Chanel Chin opens up on her side of the story in a recent interview.

She recently spoke to Samson Folarin on her marriage to the southwestern Monarch and issues that led to her exit from the palace.

In the interview, Chanel Chin was asked about the allegation that she cheated on the Oluwo, which led to their separation.

She said: “It is not true. I, Chanel Chin, swear on my life before the God of Abraham and Moses that I did not have any extramarital affair. I have never slept around with any man or woman. There was no man I was involved with except the Oluwo himself.”

She also added that she was never caught with another man. “We had 10 civil defence officers and policemen following us; and they were armed. They lived in the palace and followed us everywhere. So, it was absolutely impossible for Oluwo to catch me red-handed with a man. If I wanted to go to the bathroom, there was a policeman following me. I challenge him to give details of any such encounter. I have never defiled my bed or my body. I was never an unfaithful wife. Rather, I have forgiven many unfaithful acts committed against our bed, our marriage and our family.” Chanel said.

During the chat, Chin  was asked to give specific details of what really transpiredShe said it all started from a conversation via popular messaging platform, WhatsApp.

“I was actually begging and prostrating (myself), telling him not to destroy our family. While I was begging, he had a small tape recorder he always carried in his agbada (flowing gown). He always used it to record things. He recorded me apologising to him. He was saying, ‘You agree that I have caught you?’ Imagine a woman apologising to the husband. So, I was saying, ‘Yes’. And that is what he has been showing all the dignitaries that he caught me red-handed. He’d been looking for a way out and he used that little thing to end the relationship. He had been seeing a few women on the side. He wants power, wealth and popularity and those things are supreme for him above family values.” 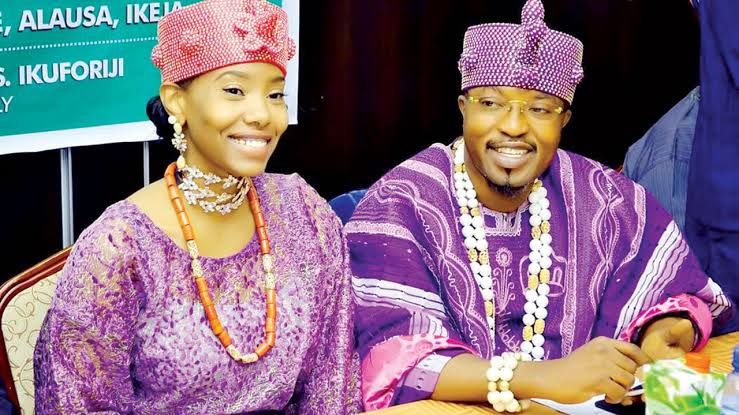 Chin was asked to speak on how she fared and how living in the palace was like for her.

She responded saying “While I was in this relationship with Oluwo, I was forbidden to speak with anybody. I was not allowed to speak with anyone from my past, even friends that I came into Nigeria with, either male or female. I have Yoruba friends in Canada; but I was not allowed to speak to them because he did not want anybody to tell me my rights. When I first got to the palace, one of the things I wanted to do was to wear coral beads. But he was saying, ‘It’s not (our) culture, you don’t need it.’ And my friends that are Yoruba said I could wear beads. But he said, ‘Don’t talk to them, they are jealous of you!’ So, I was totally isolated.”

“We had 30 Oloris (wives of the king) in our jurisdiction, married to the kings around us. But I was not allowed to mix with them. If you go to Iwo and ask the Oloris about their relationship with me, they will tell you they didn’t talk to me. I was not allowed to even go out and mingle with the people of Iwo. I was just inside the house from morning to night like a prisoner and I stayed because of my child.“

“There were some people I reached out to privately to help me, and the Yoruba women told me, ‘Just pray to God; pray that he will change’. So, that was what I was doing. In that palace, it was me, my son and God. Not even my parents were allowed to visit. No one from Canada was allowed to come to see me. I was there for four years on my own. There is an unspoken culture of silence within the royal household.”

Chanel was asked how she met with the Oba, if they really met in Canada

Chin retorted, saying that “It is not true. That was what he told a popular magazine. I did not know him in Canada. We met in Lagos. I came for holiday with some friends. Then there was a royal burial party in Lagos; he was there and I was there as well. That was how our paths crossed.“

”After his coronation, they had a party for him in Lagos and I was invited. Not by him, but by one of the people throwing the party. Another prominent Oba in Lagos introduced me to him for marriage. And they said it was great to be an Olori.”

On whether she agreed to marry him because he is a Monarch, Chin responded with saying “No. When I met him, he had nothing. He was few days from coronation. He was driving a Toyota Camry; there was no ‘packaging’ like we have now. The only thing that connected us was that we were both from Toronto, and Canadians. And we talked about different things, which built the bond.”

”The reason he came out with the story that we met in Canada was that at the time of his coronation, he was dating a girl from Iwo. After we met at the party, he brought me back to Iwo. He then started parading me around as (his) queen. He then told the girl’s family that I was his wife from Canada. He said, ‘I have a wife in Canada. I did not think she would come to Nigeria. She came from Canada to take her spot.’ So, he told the girl that he would still keep her, but she would be his second wife. The girl refused.”